Q& A and Giveaway: Caleb's Crossing by Geraldine Brooks 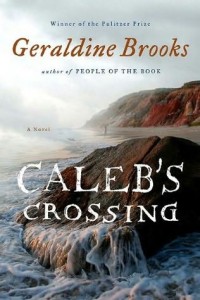 I am very excited to share with you some great news about Geraldine Brooks, fourth and newest novel Caleb's Crossing

( On sale, May 3, 2011). Geraldine Brooks is a favorite author of mine and I read her first novel, Year of Wonders

with my book club.  It is on my list of all-time favorite books so if you haven't read it make sure to pick up a copy along with her other books. Ms. Brooks is the Pulitzer Prize-winning author of March

and The New York Times bestseller, People of the Book

with my blog readers. I haven't read Caleb's Crossing

Here is a little bit about the story:

CALEB’S CROSSING is inspired by the life of Caleb Cheeshahteaumauk, the first Native American to graduate from Harvard College in 1665. Brooks first learned about him during her time as a Radcliffe fellow at Harvard in 2006. Caleb was from the Wampanoag tribe of Native Americans who lived on Martha’s Vineyard and this year Tiffany Smalley will become the second Vineyard Wampanoag to graduate from Harvard. There is little official information on Caleb’s life and Brooks’s novel is an informed imagining of what he might have gone through.
What makes this novel truly special is its narrator, Bethia Mayfield. Bethia is the strong-willed daughter of a preacher who lives in the settlement of Great Harbor on Martha’s Vineyard. She struggles with the restrictions placed on her—namely, that she is denied the education freely given to her brother. Bethia finds respite in the wild landscape of her home and it is while clamming one day that she meets Caleb, the son of a local chieftain. They form a secret friendship that, in time, leads to Caleb coming to live with the Mayfields. Bethia’s father eagerly takes Caleb under his wing, determined not only to convert him to Christianity, but also to groom him for matriculation to Cambridge and eventually, Harvard.
The harsh realities of life for both women and Native Americans are fully confronted in CALEB’S CROSSING. It is a story of difficult friendships, cultural transitions, and facing injustices.

Q&A with Geraldine Brooks, author of
CALEB’S CROSSING
Caleb Cheeshahteamauk is an extraordinary figure in Native American history. How did you first discover him? What was involved in learning more about his life?
The Wampanoag Tribe of Gay Head/Aquinnah are proud custodians of their history, and it was in materials prepared by the Tribe that I first learned of its illustrious young scholar.   To find out more about him I talked with tribal members, read translations of early documents in the Wopanaak language, then delved into the archives of Harvard and the Massachusetts Bay Colony, especially the correspondence between colonial leaders and benefactors in England who donated substantial funds for the education and conversion to Christianity of Indians in the 17th century.   There are also writings by members of the Mayhew family, who were prominent missionaries and magistrates on the island, and John Cotton, Jr., who came here as a missionary and kept a detailed journal.
There is little documentation on Caleb’s actual life. What parts of his life did you imagine? Do you feel you know him better after writing this book, or is he still a mystery?
The facts about Caleb are sadly scant.  We know he was the son of a minor sachem from the part of the Vineyard now known as West Chop, and that he left the island to attend prep school, successfully completed the rigorous course of study at Harvard and was living with Thomas Danforth, a noted jurist and colonial leader, when disease claimed his life.  Everything else about him in my novel is imagined.  The real young man—what he thought and felt—remains an enigma.
Bethia Mayfield is truly a woman ahead of her time. If she were alive today, what would she be doing? What would her life be like with no restrictions?
There were more than a few 17th century women like Bethia, who thirsted for education and for a voice in a society that demanded their silence.  You can find some of them being dragged to the meeting house to confess their “sins” or defending their unconventional views in court.   If Bethia was alive today she would probably be president of Harvard or Brown, Princeton or UPenn.
The novel is told through Bethia’s point of view. What is the advantage to telling this story through her eyes? How would the book be different if Caleb were the narrator?
I wanted the novel to be about crossings between cultures.  So as Caleb is drawn into the English world, I wanted to create an English character who would be equally drawn to and compelled by his world.   I prefer to write with a female narrator when I can, and I wanted to explore issues of marginalization in gender as well as race.
Much of the book is set on Martha’s Vineyard, which is also your home. Did you already know about the island’s early history, or did you do additional research?
I was always intrigued by what brought English settlers to the island so early in the colonial period...they settled here in the 1640s.   Living on an island is inconvenient enough even today; what prompted the Mayhews and their followers to put seven miles of treacherous ocean currents between them and the other English—to choose to live in a tiny settlement surrounded by some three thousand Wampanoags?  The answer was unexpected and led me into a deeper exploration of island history
You bring Harvard College to life in vivid, often unpleasant detail. What surprised you most about this prestigious university’s beginnings?
For one thing, I hadn't been aware Harvard was founded so early.  The English had barely landed before they started building a college. And the Indian College—a substantial building—went up not long after, signifying an attitude of mind that alas did not prevail for very long.  It was fun to learn how very different early Harvard was from the well endowed institution of today.  Life was hand to mouth, all conversation was in Latin, the boys (only boys) were often quite young when they matriculated.   But the course of study was surprisingly broad and rigorous—a true exploration of liberal arts, languages, and literature that went far beyond my stereotype of what Puritans might have considered fit subjects for scholarship.
As with your previous books, you’ve managed to capture the voice of the period. You get the idiom, dialect, and cadence of the language of the day on paper. How did you do your research?
I find the best way to get a feel for language and period is to read first person accounts—journals, letters, court transcripts.  Eventually you start to hear voices in your head: patterns of speech, a different manner of thinking.  My son once said, Mom talks to ghosts.  And in a way I do.
May 2011, Tiffany Smalley will follow in Caleb’s footsteps and become only the second Vineyard Wampanoag to graduate from Harvard. Do you know if this will be celebrated?
In May Tiffany Smalley will become the first Vineyard Wampanoag since Caleb to receive an undergrad degree from Harvard College.  (Others have received advanced degrees from the university’s Kennedy school etc.)  I’m not sure what Harvard has decided to do at this year's commencement, but I am hoping they will use the occasion to honor Caleb’s fellow Wampanoag classmate, Joel Iacoomis, who completed the work for his degree but was murdered before he could attended the 1665 commencement ceremony.

Make sure to visit Geraldine Brooks website to find out more information about Caleb's Crossing, her book tour, her other books and more.

*GIVEAWAY DETAILS*
I have TWO galley copies of Caleb's Crossing by Geraldine Brooks to give away to two lucky readers, complements of the publisher, Penguin.
To Enter:
For 1 Entry: All you have to do is leave a comment, Do you have a favorite book written by Geraldine Brooks? If this would be your first reading experience with Geraldine Brooks, what do you find interesting from the description of Caleb's Crossing or from the Q&A with Ms. Brooks? Make sure to include your email address so that I can contact you if you are a winner. Otherwise, I won't be able to include your name in the drawing.
For a 2nd Entry (Separate Comment):  Follow my blog, you can follow through Google Friend Connect to the left in my side column. If you already do, thank you, and please  make sure to let me know in your comment so I can pass the entry on to you as well. Make sure to include your email address.

For a 3rd Entry (Separate Comment): Spread the word about this giveaway and Retweet, retweet button below my name at the end of this post. Make sure to include your email address.

Open to US and Canada only. Publisher will mail books directly to the winners.
Enter by April 10, 2011.