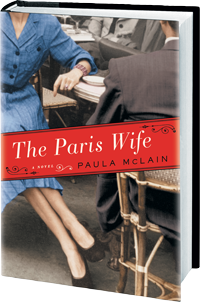 THE PARIS WIFE by Paula McLain

A deeply evocative story of ambition and betrayal, The Paris Wife captures a remarkable period of time—Paris in the twenties—and an extraordinary love affair between two unforgettable people: Ernest Hemingway and his wife Hadley.
In Chicago in 1920, Hadley Richardson is a quiet twenty-eight-year-old who has all but given up on love and happiness—until she meets Ernest Hemingway and finds herself captivated by his good looks, intensity, and passionate desire to write. Following a whirlwind courtship and wedding, the pair set sail for Paris, where they become the golden couple in a lively and volatile group of expatriates that includes Gertrude Stein, Ezra Pound, and F. Scott and Zelda Fitzgerald.
But the hard-drinking and fast-living café life does not celebrate traditional notions of family and monogamy. As Hadley struggles with jealousy and self-doubt and Ernest wrestles with his burgeoning writing career, they must confront a deception that could prove the undoing of one of the great romances in literary history.

When I first read about The Paris Wife

by Paula McLain in my local newspaper, it grabbed my interest right away. A novel related to Hemingway and his first wife, Hadley Richardson and written from her point of view and add to that a life in Paris and the background and atmosphere of the beginning of Hemingway's writing career. I am looking forward to reading The Paris Wife and I am interested in reading more about Hemingway and his novels. I've visited the Hemingway home in Key West Florida, and had a peek into his life. I found out that Ms. McLain is a local author and that was another draw for me. I missed out on her local readings and book signings but I'm keeping an eye on her events schedule on her website to see if she has any other local events  in the area.


For a list of where to purchase The Paris Wife, go here. 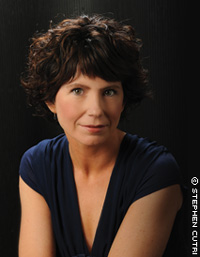 Paula McLain received an MFA in poetry from the University of Michigan and hasbeen a resident of Yaddo and the MacDowell Colony. She is the author of two collections of poetry, as well as a memoir, Like Family, and a first novel, A Ticket to Ride. She lives in Cleveland with her family. You can visit Paula McLain’s website to learn more about The Paris Wife at www.pariswife.com.

There’s a moment in A Moveable Feast, when Ernest Hemingway and his new
wife, Hadley, have just moved to Paris, where he’s hoping to earn his stripes
as a writer. It’s 1922. Winter has settled grimly in, and Hemingway, sitting
in a café after a day’s writing, watches a cold rain falling and feels the grip
of melancholy and emptiness. He orders a dozen portugaises and dry white
wine and as he eats the oysters, “with their strong taste of the sea and their
faint metallic taste that the cold white wine washed away, leaving only the
sea taste and the succulent texture,” something happens. The emptiness
he’s feeling is washed away, too. It occurs to him that he and Hadley could
leave Paris for a holiday in the Swiss Alps, where there would be lovely snow
instead of rain. He rushes home to tell Hadley of his plan and she agrees
wholeheartedly. Within days they’re tucked into a cozy chalet in Chamby,
Switzerland. They teach themselves to ski and, at night, lay tucked into the
featherbed with their books and a fire roaring nearby, and everything is
better than good. It saves them.

Researching Hemingway and Hadley’s life together for The Paris Wife, it
struck me that the overwhelming success of this trip to Chamby set a tone
for their marriage. For the next five years, as Hemingway was becoming
the writer we know now, arguably the most influential of his generation, he
and Hadley lived in Paris and traveled with increasing relish—from the ice
glaciers of the Austrian Vorarlberg to the hot cobblestones of Pamplona and
everywhere in between: Milan, Rapallo, Lausanne, Antibes, Madrid, Valencia,
San Sebastian. They had an endless appetite for a fresh view, exotic dish,
unfamiliar wine—for life, really. And as I worked on The Paris Wife, tracing
their journeys imaginatively, living with them in these amazing places, I was
literally swept away.

I wrote nearly all of the first draft tucked into a brown velveteen chair at
Starbucks in Cleveland, where I live. Hardly a Parisian café—and yet it
didn’t matter. Outside the fogged glass, it was October, then December,
then February. Snow fell, melted, fell again—but I didn’t really feel it. I had
slipped through a miraculous portal to San Sebastian and the blinding white
sand beach of La Concha, or to the first riotous night of Fiesta in Pamplona,
complete with chirping fifes and fireworks and riau-riau dancing.

When I finished the book, late in May, I almost couldn’t let it go. Living inside
their story was such an incredible voyage—and because I’ve been very lucky
indeed, it hasn’t ended. This past summer I traced the Hemingways’ route
through France and Spain—Paris to San Sebastian to Pamplona, to Antibes.
It was a life-changing trip and it began with a plate of perfect oysters,
portugaises, and dry white wine at one of Hemingway’s favorite Parisian
cafés, the Closerie des Lilas. They tasted of the sea, yes, and also of history
and memory. Of sweeping love, and life lived to the fullest. They tasted of
Hemingway’s Paris and my own extraordinary good fortune—and I savored
every last drop.

Check out this excellent interview with Paula McClain from Cool Cleveland: