I am honored to welcome Ellen Horan, author of 31 Bond Street to Redlady's Reading Room today. I will be posting a review of 31 Bond Street tomorrow and this is a must read, gripping historical mystery that will hold your attention from start to finish. 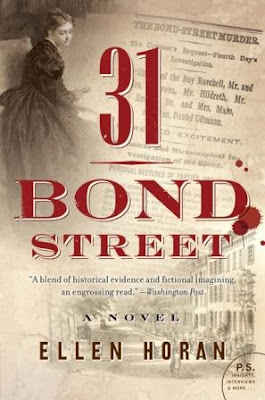 About the Book from Harper Collins:

At once a gripping mystery and a richly detailed excavation of a lost age, 31 Bond Street is a spellbinding tale of murder, sex, greed, and politics in 1857 New York. Author Ellen Horan interweaves fact and fiction—reimagining the sensational nineteenth-century crime that rocked the city a few short years before the Civil War ripped through the fabric of the nation, while transporting readers back to a time that eerily echoes our own.

Today, Ellen Horan will share what helped the characters from 31 Bond Street come alive after she had done all the research......

Taking Your Character for a Walk by Ellen Horan

My novel 31 Bond Street is based on an actual murder and trial that occurred in 1857 in
New York City. I discovered the case from a newspaper clipping that I found in a print
shop. After researching the trial, I decided to write a fictionalized version of this case. I
had already met my characters from the actual newspapers: there was the murdered man,
a dentist,  Dr. Burdell, who lived in a genteel neighborhood; he was killed at home by
someone who entered his office, stabbed him and nearly decapitated him, and left without
a trace. It turns out that he was something of a cad and an unscrupulous businessman, but I didn’t have to worry too much about at first, because, as the book opens, he is already dead.

Then there was Emma Cunningham, a young widow who lived upstairs in his house. She
was an attractive housemistress hired to manage his servants. She was something of an
enigma because she admitted to a romantic relationship with Dr. Burdell and therefore
quickly became a suspect. Her lawyer advised her not to talk, which only intensified the
mystery surrounding her.

Her defense lawyer, who takes on this murder case, was a prominent lawyer named
Henry Clinton. He wrote about his strategies in a book called “Extraordinary Cases,”
which I used for research.

So I had plenty of facts—and I already had characters, with quite a bit of tension between
them. But the problem arose of how to flesh them out. Fiction has its own demands, and
often the facts can’t do the job.

One trick I discovered when I was stumped by a scene – particularly one where I needed
to move the timeline along but the character wouldn’t budge, was to take my character
for a walk. Literally—I would go outside, (to the streets of New York City, where I live)
and start walking. When you are in a city, it is fascinating to watch others walking. They
are walking quickly to get somewhere, usually to work, or hurrying to meet someone, and
you will see how people are set in their ‘inner’ heads. Their closest concerns and thoughts
are just under the surface. Sometimes they seem to be concentrating on a conversation going on within. Each person has a unique ‘inner voice’ – even when alone, they are
talking to themselves all the time.

When I took my characters for a walk, their voices would talk to me from the inside,
which helped me to understand inner motives and point of view. What would Emma
Cunnigham be thinking or worrying about as she hurried about the city, shopping, and
doing household errands? Would she be concerned about the difficult servants, or about
her teenaged daughters? Having been recently widowed, would she be worrying about
how to keep a roof over her head?

As for the defense lawyer, Henry Clinton, what would be going through his head as he
pondered taking on a sensationalist but thankless case, against the wishes of his law
partner? He had a nemesis in the District Attorney and perhaps he wanted to cross swords with him to even out past scores. Was he worried what his beautiful wife, Elisabeth would think? Was he worried that he might lose her respect if he risked everything on this case and failed?

So, taking my characters for a walk is how they became more alive to me. One day,
taking a break from the computer, I went for a walk and reached the corner of Broadway
and 10th St. just a block from my apartment. A sentence popped into my head: “New
York was a walking town, and walking allowed him time to think.” I placed that line
on p. 62. In fact, Dr. Burdell’s service was at Grace Church, which, today, is still at that
spot. I assigned that line to Henry Clinton who was leaving the murdered man’s funeral.
He is heading home to consult his wife about taking on the defense of Emma Cunnngham
– to make a decision that will test them both, and change their lives forever.

(An essay “The Story Behind the Book” can be found in the PS Section at the back of the
paperback and on my website, www.31BondStreet.com)

Check out the book trailer:

About the Author Ellen Horan: 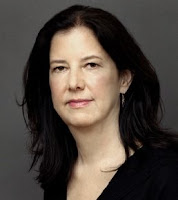 Ellen Horan has worked as a studio artist and as a photo editor for magazines and books in New York City. She currently lives in downtown Manhattan, the setting of her first novel, 31 Bond Street.
Find out more about Ellen and 31 Bond Street at her website. Add Ellen as a friend on Facebook.