Waiting on Wednesday: Girl in Translation by Jean Kwok

"Waiting on Wednesday" is a weekly event, hosted by Breaking the Spine, that spotlights upcoming releases that we are eagerly anticipating.


My "can't wait to read" selection is: 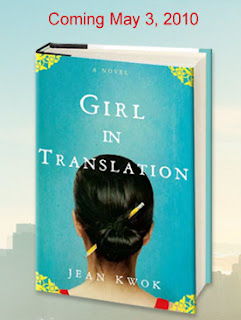 Girl in Translation by Jean Kwok

“A moving coming of age story, reminiscent of A Tree Grows in Brooklyn. Kwok perfectly captures the voice and perspective of a young immigrant, and the result is a powerful work about love, sacrifice and faith.”
—Min Jin Lee, author of the bestselling Free Food for Millionaires

Girl in Translation is an inspiring debut about a young immigrant in America, a smart girl who, living a double life between school and sweatshop, understands that her family’s future is in her hands.


Eleven-year-old Kimberly Chang emigrates from Hong Kong to Brooklyn with her mother, hoping to find a better life. Her mother is immediately overwhelmed by the demands of her new city, and the two find themselves living in squalor and working in a sweatshop. Exiled by language, estranged by a new culture, Kim feels she must support her family using her natural smarts and talent to excel in school. As she navigates between languages and worlds—school and sweatshop, inquisitive teenager and dutiful daughter, privilege and poverty—she learns to selectively show different parts of herself depending on whom she’s with. She fights for dignity, acceptance, and survival, earning herself a place at a prestigious New York private school and eventually a spot at Yale, but the personal choices she has made along the way – including falling deeply in love with a Chinese factory boy who ties her to the world she would like to move beyond – threaten to derail everything she has worked so hard to achieve. Ultimately, Kim must make an unfathomable sacrifice in order to ensure the success of her family.


In Girl in Translation, Jean Kwok spins a moving tale of hardship and triumph, heartbreak and love, and all that gets lost in translation.


I found this wonderful video with the author, check it out:

Email ThisBlogThis!Share to TwitterShare to FacebookShare to Pinterest
Labels: Waiting on Wednesday