Review: The Girl Who Kicked the Hornets' Nest by Stieg Larsson 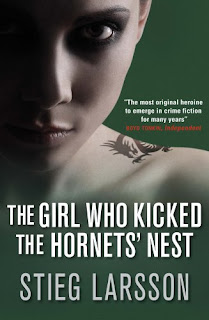 The Girl Who Kicked the Hornets' Nest is the last book in the Millenium trilogy by Swedish Author Stieg Larsson . This final book in the trilogy picks up where the second book, The Girl Who Played With Fire leaves off. It's over 600 pages and gets bogged down in details now and then but it's still a very gripping novel. We are able to follow Salander as she faces her past head on and ends up barely holding on to her own life. Mikael puts the pieces together and helps solve a mystery related to a hidden group that has protected one man and themselves amongst high government security. Larsson's writing style is rich and detailed and is strongly character driven. There are definitely disturbing parts to this novel as in the others that are graphic and violent in nature, so be forewarned if this is something that bothers you. From what I've read about Larsson, I believe it was his intent to bring attention to the issues of violence against women that he must have believed was a societal issue as well as government corruption. This was a common thread throughout the Millenium Trilogy. Wikipedia shares some interesting information about the books where it states Larsson's literary influences:

"However, one of the strongest influences originates from his own
country - Pippi Longstocking by Sweden's much-loved children's author, Astrid
Lindgren. Larsson explained that one of his main recurring characters in the Millennium series, Lisbeth Salander, is actually based on Pippi Longstocking and in his books is reimagined as a grown up version of her"

I found Lisbeth Salander to be the most interesting character in the series. She was a strong, quirky, unique and feisty character. She endured a childhood of abuse and tragedy that was horrific and continued into her adulthood. In the toughest situations she endured and fought and never gave up her fight for truth. She was resilient and intelligent and even referred to as possibly having Aspergers Syndrome which would explain some of her social challenges and genius level abilities with computers.

Sadly, Stieg Larsson was a Swedish writer and journalist and died before the Millenium Trilogy was published. You can read more about Stieg Larsson here. This is the last book in the Millenium series and I will miss reading more about the characters and some storylines that were left hanging and we will never know the answers to...one especially is what happened to Lisbeth's twin sister Camilla. We are left to our imaginations now.
*My wonderful friend Ginny who I know from an online book group read the series ahead of me and sent me her copy of The Girl Who Kicked the Hornets' Nest. She was so anxious to read it and couldn't wait until the US version would be published and available in 2010. She ordered a copy through Book Depository UK which is the hardback edition. I passed it along to another friend Marie-Louise who is also in our book group, it's being shared among friends! Thanks Ginny!