Review: Hotel on the Corner of Bitter and Sweet by Jamie Ford 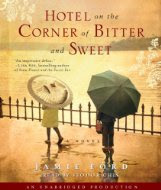 Description: In the opening pages of Jamie Ford’s stunning debut novel, Hotel on the Corner of Bitter and Sweet, Henry Lee comes upon a crowd gathered outside the Panama Hotel, once the gateway to Seattle’s Japantown. It has been boarded up for decades, but now the new owner has made an incredible discovery: the belongings of Japanese families, left when they were rounded up and sent to internment camps during World War II. As Henry looks on, the owner opens a Japanese parasol.

This simple act takes old Henry Lee back to the 1940s, at the height of the war, when young Henry’s world is a jumble of confusion and excitement, and to his father, who is obsessed with the war in China and having Henry grow up American. While “scholarshipping” at the exclusive Rainier Elementary, where the white kids ignore him, Henry meets Keiko Okabe, a young Japanese American student. Amid the chaos of blackouts, curfews, and FBI raids, Henry and Keiko forge a bond of friendship–and innocent love–that transcends the long-standing prejudices of their Old World ancestors. And after Keiko and her family are swept up in the evacuations to the internment camps, she and Henry are left only with the hope that the war will end, and that their promise to each other will be kept.

Forty years later, Henry Lee is certain that the parasol belonged to Keiko. In the hotel’s dark dusty basement he begins looking for signs of the Okabe family’s belongings and for a long-lost object whose value he cannot begin to measure. Now a widower, Henry is still trying to find his voice–words that might explain the actions of his nationalistic father; words that might bridge the gap between him and his modern, Chinese American son; words that might help him confront the choices he made many years ago.


This is a story that is deeply touching and moving, it is about young love as well as about love and honor between children and their parents. I was entranced from the start when Henry a Chinese-American man, learns that Seattle's Panama Hotel has discovered unclaimed belongings of Japanese Americans. This is based on the real discovery of these items that were stored in the basement when Japanese families were sent to internment camps in the 1940's. The story is told from two different time periods, the 1940's starting when Henry was 12 years old and from the 1980's when Henry is in an older man and recently widowed. When Henry was 12 he was sent to a private white school and his parents make him wear a button that says "I am Chinese" so he is not mistaken for being Japanese. There not only does he have to deal with racism and bullying but on the bright side he develops a friendship with Keiko, a Japanese-American girl his age. Keiko and her family are later sent away to internment camps with hundreds of other Japanese families from Seattle. The story weaves back and forth from the past to the present and we learn much about the effect the internment and this painful time had on the Japanese and those who cared for these families. There is much focus on sharing parts of Seattle's history of culture, architecture and Jazz. This is woven throughout the novel and much is based on real history and experience. We learn what happens as Henry moves forward in life and the relationships that he develops and how he growns into manhood and the effect his childhood experiences have on him as an husband, father and friend.

The dialogue and characters are rich and vibrant. The story touched me on a deep level and the characters jumped off the page and felt real. This is a coming of age story that allows you as the reader to truly experience the bitter and the sweet that one can experience in life. I look forward to more books written by Jamie Ford, this is his first novel and I expect many more wonderful books ahead.


You can read more about Hotel on the Corner of Bitter and Sweet and author Jamie Ford at the author's website HERE.

*Thanks to LibraryThing Early Reviewers for sending me an ARC copy of this book.