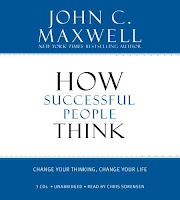 Here is another review from my husband Greg:

It should not be too surprising that one's thinking style can directly relate to their degree of success. Of course that's an almost meaningless statement unless you first define what "success" is. Success is a relative and individualized concept, but according to the author, John C. Maxwell, it has a lot to do with "bottom line" thinking.That term carries some baggage, so let's be clear and state that "bottom line" here does not necessarily refer soley to maximizing income in the balance sheet sense, but rather relates to a clear perspective of one's goals whatever they might choose to be. The advice given is to be a big picture thinker. Big picture thinkers differentiate themselves by keeping the broader, bottom line goals in mind no matter what task and no matter how small, they are attending to at the moment.
In addition, one must be a "possibility thinker". Possibility thinkers don't accept the oft stale and mundane "common wisdom".I generally agree with that, however I don't necessarily consider it a hard and fast rule. For a counterpoint, see the book "The Wisdom of Crowds" by James Surowiecki . I believe possibility thinkers should include all points of view, including the common wisdom.The author advises that we should "fire the dullards and hire the nuts". All well and good, but difficult in today's conservative corporate culture, and in today's economy it may be impractical to resolve simply by changing employers as suggested.
One aspect of this book that made me think was the emphasis placed on collaboration and unselfish cooperation by maintaining a spirit and attitude of helping others. As both a former CEO of his own company as well as a pastor, Maxwell comes across as credible and sincere in his message. I will say that I don't necessarily share the same role models (both individual and corporate) which he refers to. For example, I'm just not a huge fan of Merck, a company which found it economically and morally acceptable to produce mercury laden vaccines injected into infants. How did that fit into their bottom line thinking?
The audio book is unabridged and fits on 3 CD's, so it is a quick listen and you won't be overloaded with information.That works because so much of this message focuses on the fundamentals. That could mean that you've heard some of this already,as in "if you're idea can't be written on the back of a business card, then it's not a clear idea" (questionable common wisdom?), so this book might be better viewed as a gentle introduction to the subject matter if you're new to this area of success style self-improvement books.I could see listening to this book several times for reinforcement and motivation. In my own case, I found that I already practice much of what was covered, especially with respect to possibility thinking. By my own measure, I consider myself to be "reasonably successful" but perhaps not "highly successful". This leads me to think that those who are highly successful generally follow the principles outlined in the book, but on the other hand,following these principles does not necessarily guarantee one a high degree of success. As the book "Outliers" points out, (reviewed elsewhere on this blog) success can also be highly situational.
So apart from the specific "role models" issue I had, overall I would give this book a favorable rating (3.75/5). It's worth a listen or two.

Thank you to Hachette Books for sending this audiobook.