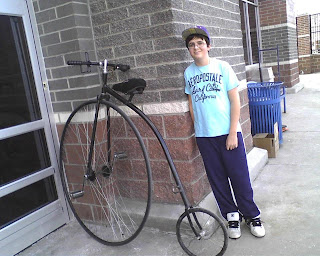 We've had an unusually warm winter (except we currently have a few inches of snow on the ground) and this picture was taken at the beginning of February on a warm day. My son and I went to Walmart and outside we noticed this Penny Farthing bicycle. Of course, mom had to take a picture and you can see from the expression on my son's face that he had an "oh, mom...do you have to?" moment. We've seen a man riding this type of bicycle in the area but it's usually in the spring or summer, not in winter. The owner must be tall as I can't imagine climbing up onto this bicycle without a stepstool! You can read more about the Penny Farthing bicycle on wikipedia, here.

Penny-farthing, high wheel, high wheeler, and ordinary are all terms used to describe a type of bicycle with a large front wheel and a much smaller rear wheel that was popular after the boneshaker, until the development of the safety bicycle, in the 1880s.[1] They were the first machines to be called "bicycles"

Penny-farthings are still ridden today, if only for the novelty value

Saturday Snapshot is hosted by Alyce of At Home With Books