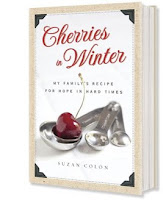 Cherries in Winter: My Family's Recipe for Hope in Hard Times by Suzan Colón is part memoir and part cookbook and the perfect book to read in the winter...or anytime for that matter. This is a beautiful book written in a narrative style by Suzan that emphasizes a warmth and gentleness in tone. I found it very inviting and easy to read. Suzan found herself laid off from her magazine job during the economic changes of 2008. She had to make adjustments and to cut back on expenses including expensive haircuts and even the basic necessities including the food budget, for herself and her husband. She found her Nana's recipes in a folder in the basement along with scraps of paper and envelopes filled with her grandmother's wisdom and family history.

Suzan found stories of how her grandmother and great grandmother simplified menus and made do during the great depression. Suzan's mother also filled in some of the details along the way. Suzan shared some of these recipes that she modified to fit more modern times and the stories behind them, in the book. Recipes such as Beef Stew, Baked Pork Chops, Meatloaf and even desserts such as lemon meringue pie and butter cookies.

Suzan learns that she isn't the only one that has had to go through tough times and the three other strong women of her generation also had to do the same. She finds strength through the recipes and comfort food that she prepares for herself and her husband. She learns that there is wisdom to be learned from her family members that have faced similar challenges in their own past.

I found this book one that many women could relate to as we learn from our grandmothers and great grandmothers just how hard it was for them to survive during the depression and war times. I am very close to my paternal grandmother who is now 92 and in poor health. She was born and raised here in the USA and lived through the depression. I treasure the stories that she shared with me of how hard times were as her parents were immigrants and illiterate and her father was a junk man. He drove around a horse and buggy and sold rags and old things to make a dollar. They were a large family and she learned from her older brother how to line her shoes with cardboard when they had holes in them. He knew that their parents couldn't afford new shoes so he tried to help. My grandmother shared with me that there may not have been much money but there was a lot of love and that is what held them together. They learned to survive through hard times and that is a lesson that we can all benefit from. Suzan shares that lesson she learned from her family with us throughout Cherries in the Winter, and it is one we can all learn from.

I highly recommend this gem of a book that is inspiring, entertaining and will make you stop and think about the hardships in your own life and how to learn and treasure the wisdom from past generations. It makes me wonder about my own grandmothers recipes and where they ended up. I think that they may be in my aunts basement and I'm going to try and find them. This would make a great book to discuss with a book club and the recipes could be shared and served as there are a variety of recipes to choose from. There is also a readers guide for Cherries in the Winter that you can find here.

Here is a video that I found of Suzan making meatloaf with her mom and explaining the story behind the title of the book Cherries in Winter. I definitely want to make this meatloaf over the winter, it looks like a very hearty meal that my family would enjoy:


Here is another video of Suzan making butter cookies, the recipe is in the book on page 95. They sound delicious and easy to make. I am going to make these cookies this week.

Check out Suzan Colón's website Cherries in Winter, here. You can find much more information about the book and Suzan as well as some old photos of the family members she discusses in the book.

Disclosure: Thanks to Doubleday who sent me this Bound Galley copy. I am an Amazon Associate.